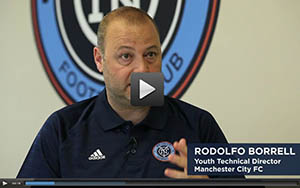 Prior to joining Manchester City, Borrell headed Liverpool FC’s Academy (were he trained Raheem Stirling) for five years, and prior to that was a member of FC Barcelona’s Academy staff, where he worked with Lionel Messi and Cesc Fabregas as teenagers.

“It was a very well thought out and rounded session, run by fun and knowledgeable coaches with an unbelievable understanding of the game” says Beachside Midfielder Dan Mines. “The session was hard work, with each station cycling continuously into the next, but the kind of hard work that you have fun doing because it’s made up of great drills that even the best soccer players can get better from. The coaches were excellently prepared, setting up just the right drills for players of our age and skill to perform at a high pace and level, while demonstrating for the spectating coaches how a solid practice is run.”

“Every time Rodolfo chimed in, you could sense your soccer IQ go up a few points just by listening; his points demonstrated a unique view of the game and how to play it. Overall, the atmosphere was amazing and I had a great time, as did everyone else on the team”

Then he gave me a tour of Manchester City’s training grounds:  just completed 3 months ago and considered the best in the world.  We then observed the U9, U10 and U11 training sessions while he was explaining the youth training objectives.

It was an tremendous experience for me personally and our relationship with MLS’ New York City FC will greatly benefit our club. It already has.”